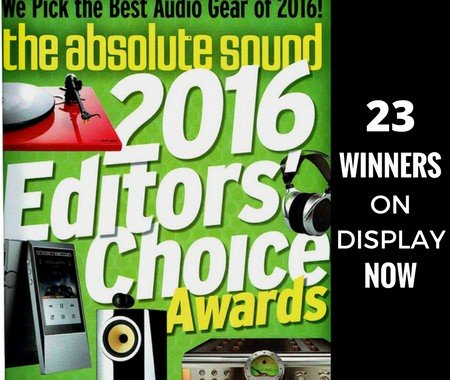 We always look forward to the March issue of The Absolute Sound. We can’t wait to see their Editors’ picks for the best audio gear for the year. More than 800 of the top speakers, amps, DACs, music servers, headphones, portable players, turntables, etc. are selected with each product category divided into price ranges.

Congratulations to these Editor’s Choice Award winners from Bowers & Wilkins, REL, PrimaLuna, Rotel, Oppo, Sony, Pro-Ject, and AudioQuest, that we proudly have on display. All 23 products are exceptional and you can audition them in our showroom. 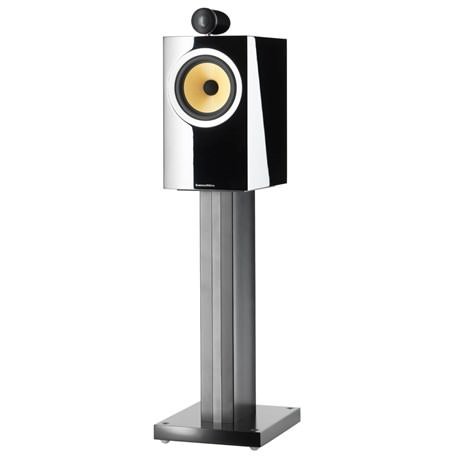 “This moderately priced stand-mount is the least expensive product in the new CM6 Series to include B&W’s now-iconic tweeter mounted atop the cabinet in its own enclosure. This feature imbues the CM6 S2 with the ability to throw a wide and highly resolved soundstage among other attributes.”– The Absolute Sound 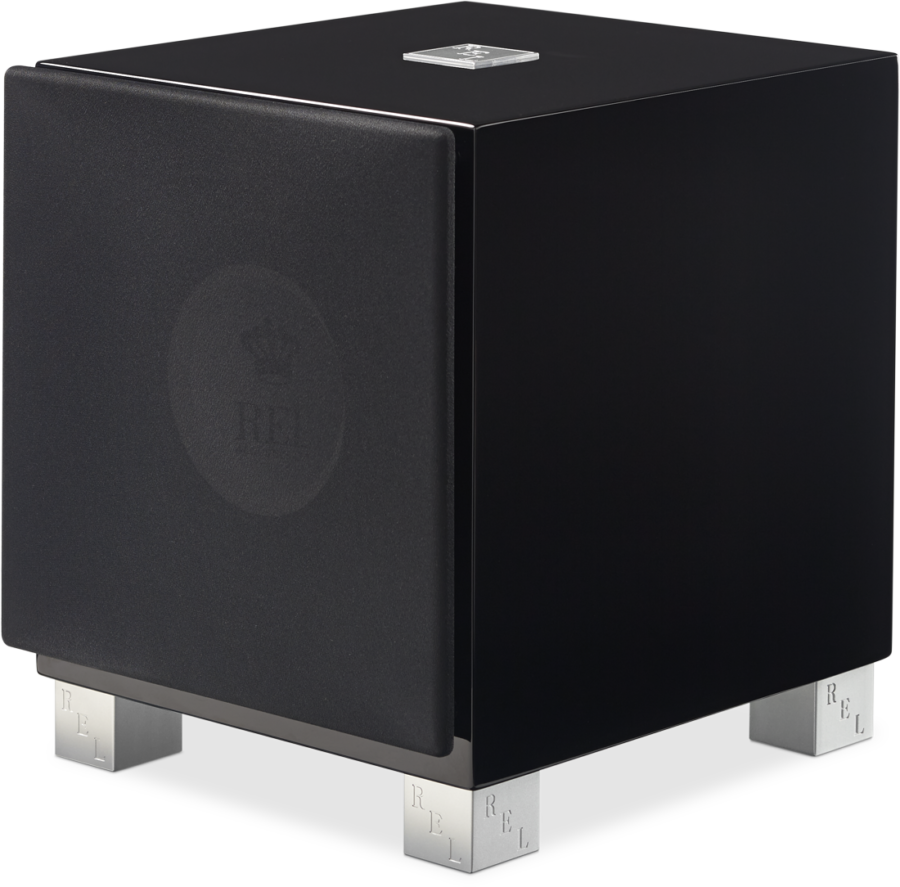 “A special round of applause is due to this mini-sub for music lovers. The new T/7i is even faster and tighter than its forbear, yet remains tonally supple, with well-defined timbres.”– The Absolute Sound 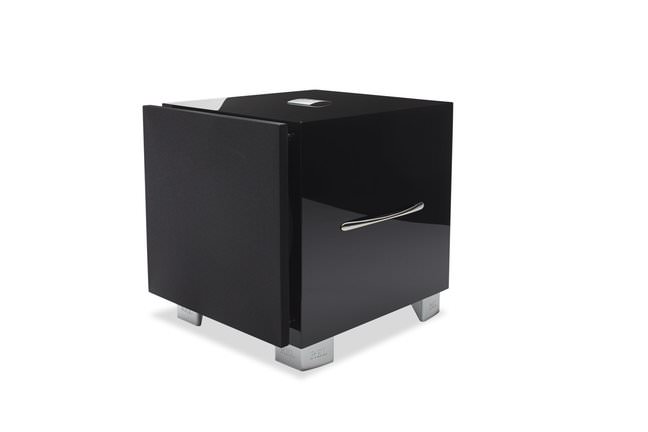 “The extraordinary thing about REL’s latest effort is that it buries once and for all the idea that only small subs can excel off the line, and are less sonically detectable than their larger, more explosive, more ponderous cousins. Fact is the S5 is big – a 12′′ woofer with companion 12′′ downward firing passive radiator and 500 Class D watts to provide the fireworks.”–The Absolute Sound 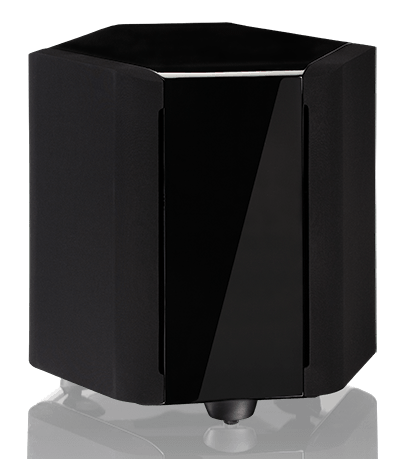 “The Paradigm Sub 2 may be one of the few subwoofers that can be properly mated with planar loudspeakers. Its lightning speed and ability to project front, rear and sideways mean that its presence and positioning are simply impossible to detect.”– The Absolute Sound

“The first product in PrimaLuna’s higher-performance line of tube units is a real honey, surpassing the ProLogue Two across the board.” Rated at only 38 watts in ultralinear mode, it sounds much more powerful due to its outstanding transformers, but requires speakers that are at least moderately efficient.”– The Absolute Sound 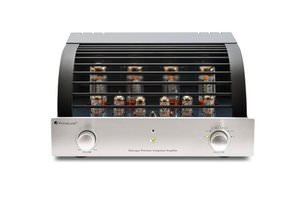 “A tube-roller’s delight that thanks to autobiasing, the DiaLogue Premium can hardly be bettered when it comes to user-friendliness and operational flexibility.”– The Absolute Sound

“The RC-1570 stereo preamplifier is a fully featured unit with four analog inputs, and additional balance analog-in, and even a moving-magnet phonostage…Indeed, the RC-1570’s excellent all-around sound–it gets the essentials of timing, tonality, and dynamics right despite its modest price–only gets better with high-resolution files.”– The Absolute Sound 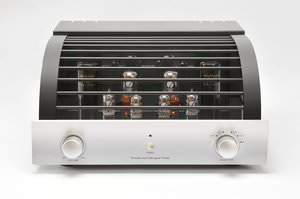 “With its massive toroidal power transformers, this true dual-mono, point-to-point-wired preamplifier is unflappable, reproducing music effortlessly and with wonderful dimensionality even through complex, dynamically challenging musical passages.”– The Absolute Sound

“Few disc player/DACs can compete with Oppo’s BDP-105D at (or even near) its’ price point because the Oppo offers a seemingly unbeatable combination of versatility, flexibility, and serious high-end sound quality. Clean, clear, and detailed, it is far more revealing than it has any right to be for the money.” -The Absolute Sound 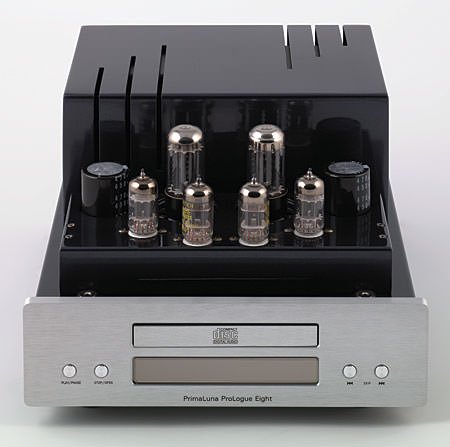 “An amazing value! Unique tube-based clock. At its best, with the board upgrade, the Eight closes in on even the most expensive competition. It’s blessed with plenty of boogie factor, superb clarity, sensuous mids, and lovely harmonic bloom. Its soundstage is wonderfully transparent.”– The Absolute Sound 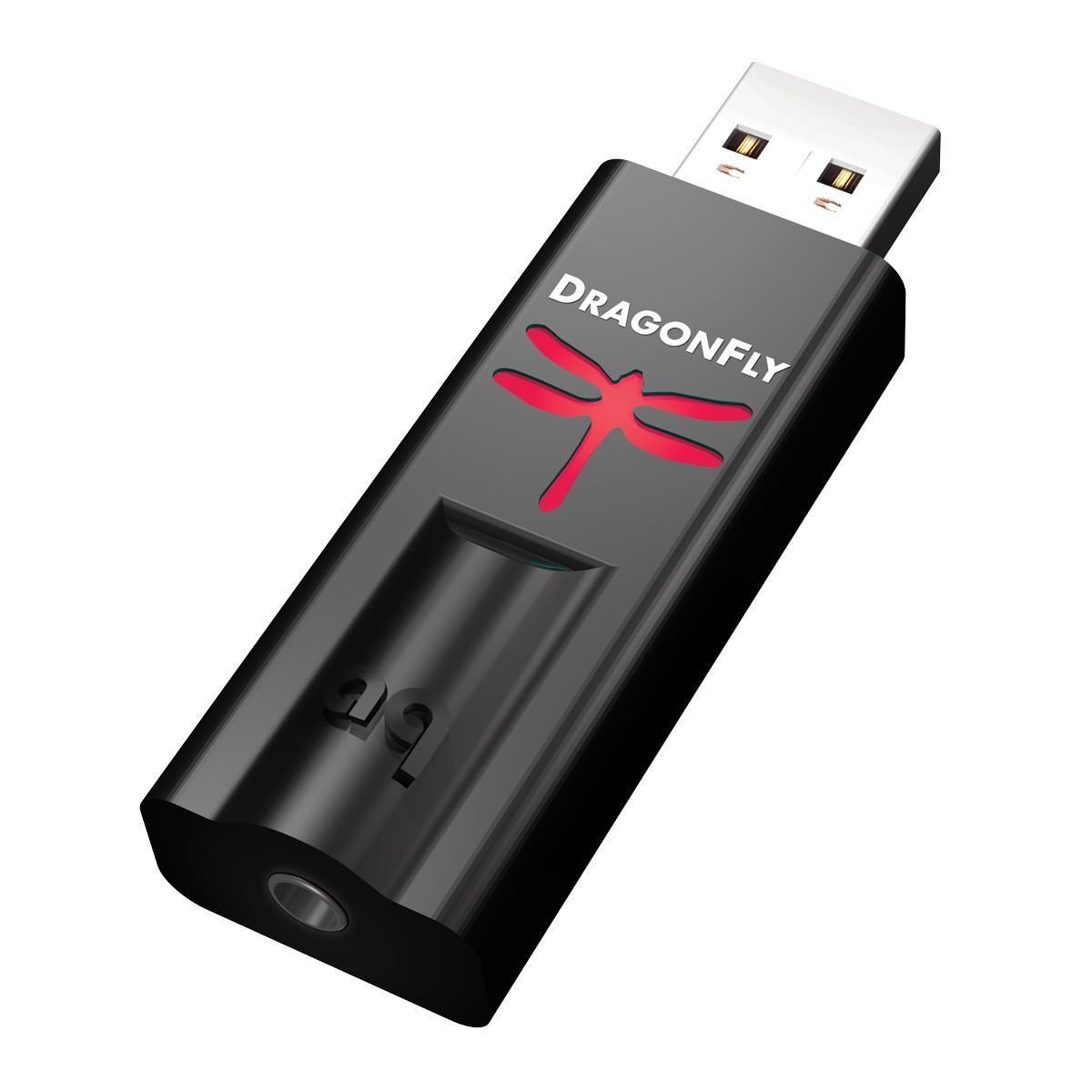 “How can you not absolutely love an asynchronous USB DAC packed with audiophile-grade design elements in the form factor of a USB stick that costs $149?…A brilliant product.”– The Absolute Sound

“As the flagship model for Sony’s ‘High Definition Music Initiative,’ the new Sony HAP-Z1ES defines what Sony sees as the future of two-channel audio. It attempts to be easy for a naive user to operate, yet capable of the highest audio quality. And while it’s relatively simple to make an audio product that is easy to use, very few ergonomically elegant mass-market audio devices also produce state-of-the-art sonics. This one does.”– The Absolute Sound 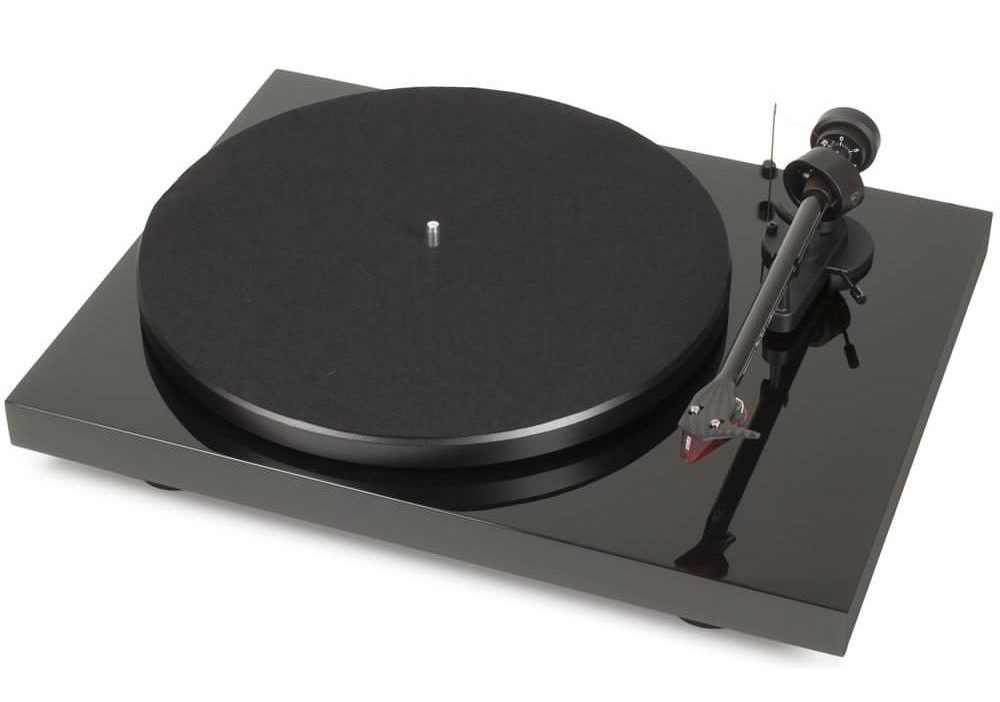 “The most significant upgrade to Po-Ject’s latest Debut is found in the model’s name, which refers to the lighter, more rigid, single-piece 8.6′′ carbon-fiber arm tube that replaces the Debut III’s aluminum tube. Pre-mounted with Ortofon’s 2M Red moving-magnet cartridge, the Carbon offers all one expects from a modestly priced table.”– The Absolute Sound 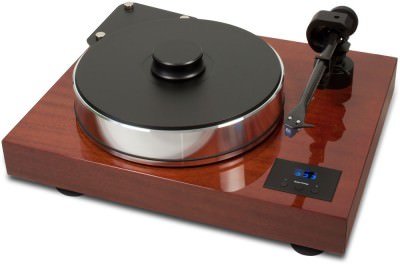 “Long known for affordable, high-value turntables, Pro-Ject has recently entered the market for more up-scale models. And its Xtension 10 is a worthy contender…What makes the ensemble special is its ability to get at the heart of the music, consistently providing not only a high-level of musical satisfaction but doing so in a way that delivers a powerful emotional wallop.”– The Absolute Sound 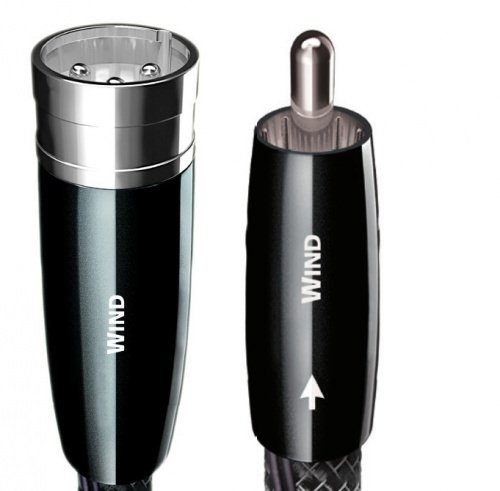 “This outstanding interconnect, part of the Elements Series that replaces Niagara, features AudioQuest’s top technologies, including Perfect-Surface Silver conductors, FEP Air-Tube insulation, an upgraded Noise-Dissipation System, the 72V Dielectric Bias System, and new plugs designed by AudioQuest. It all adds up to an extremely transparent and revealing interconnect that can give the mega-priced competition a run for the money.” -The Absolute Sound 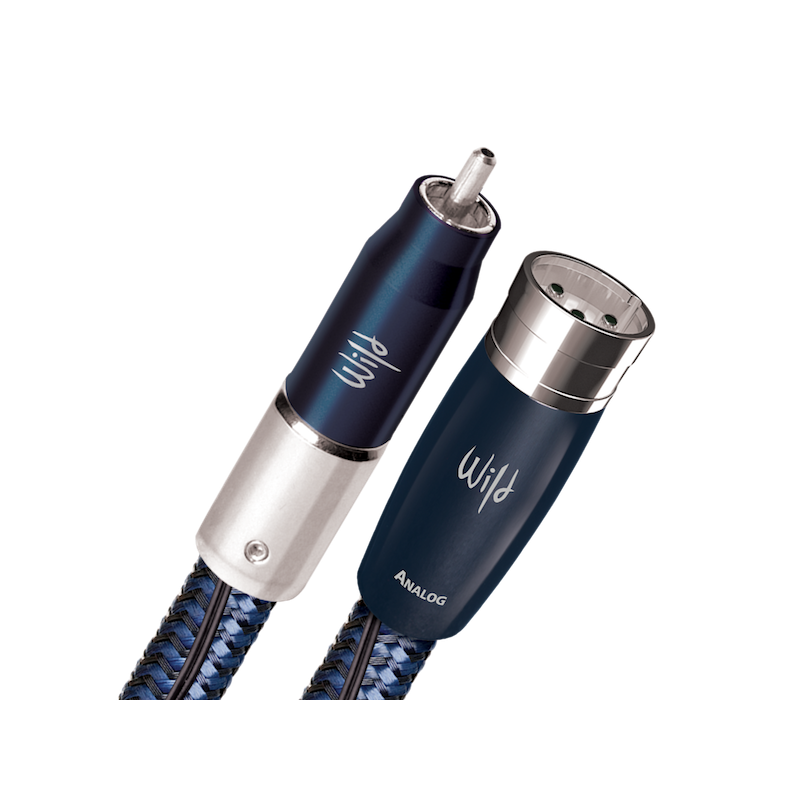 “Pure silver wire, long ago exiled into conductor Purgatory, has been making a comeback of late and AudioQuest’s Wild Blue Yonder (WBY) interconnect is one strong example. AudioQuest has really elicited the strengths of this metal in WBY’s openness and extension–and left behind the glaze, glare, and icy sheen of early silver efforts.”– The Absolute Sound 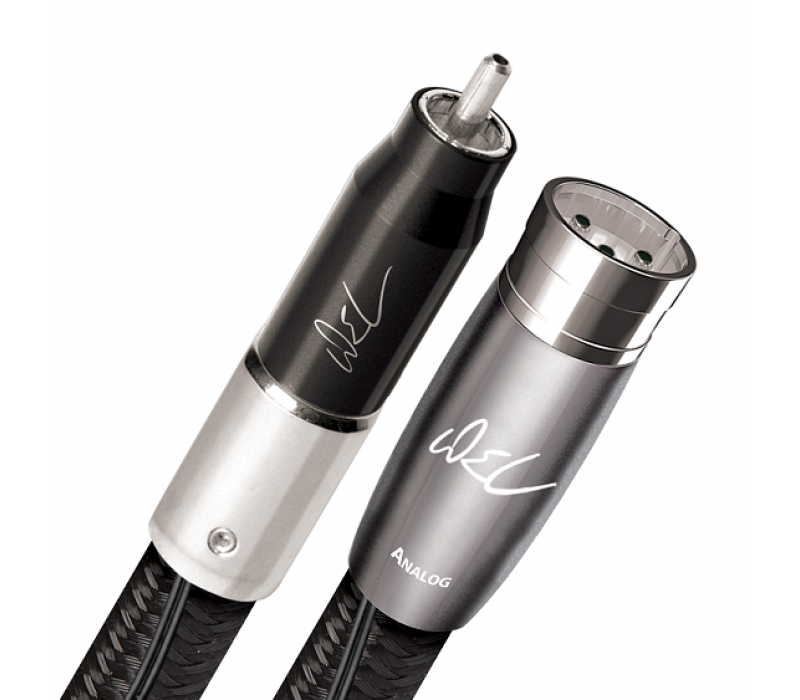 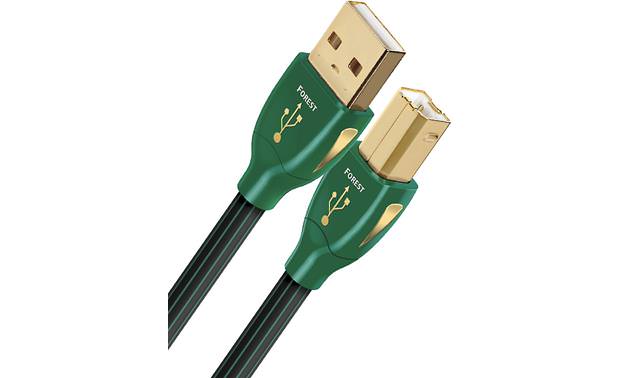 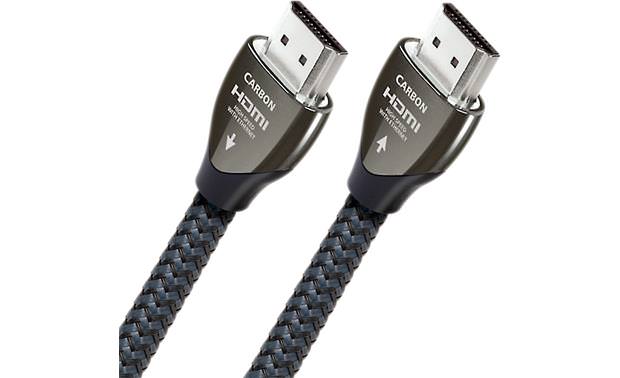 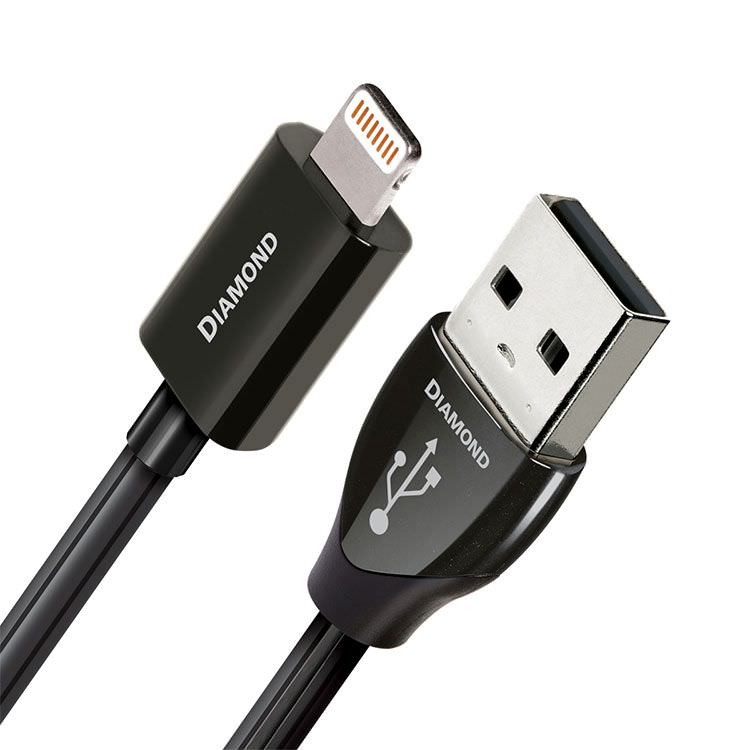 “This uber-expensive USB cable is simply revelatory in its combination of ease and refinement on one hand, and resolution and transparency on the other. Although capable of resolving the finest detail, Diamond USB has a relaxed quality that fosters deep musical involvement.”– The Absolute Sound 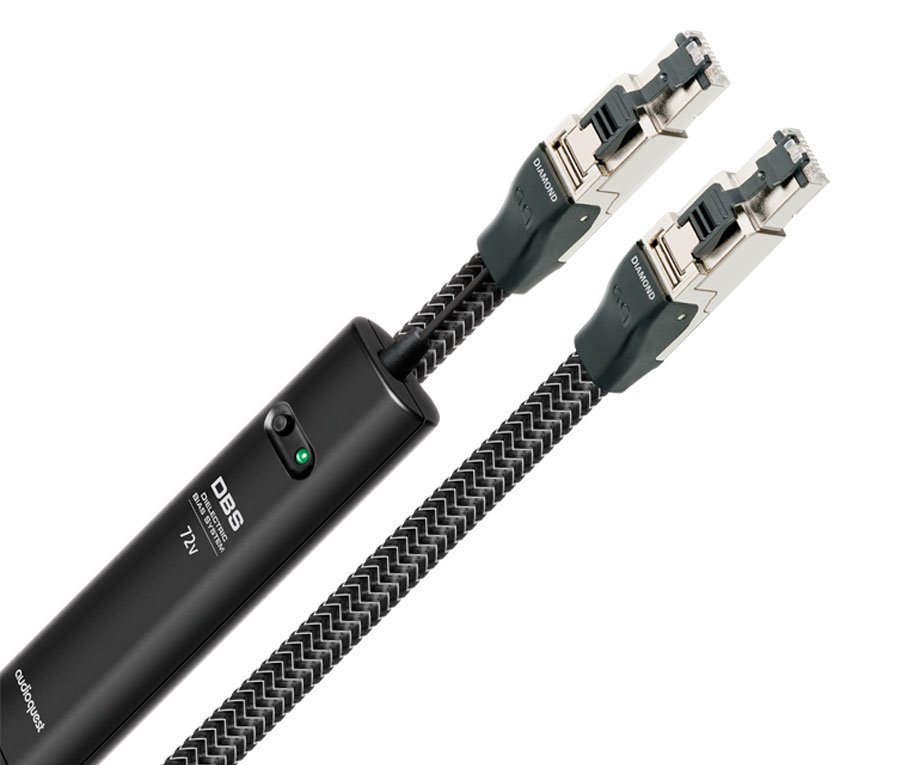 “If you’re using a generic Ethernet cable anywhere in your computer audio setup, you haven’t heard your system’s potential. Even in a link such as a NAS drive to a computer, AudioQuest’s Diamond Ethernet renders a noticeable improvement in resolution and ease.”– The Absolute Sound 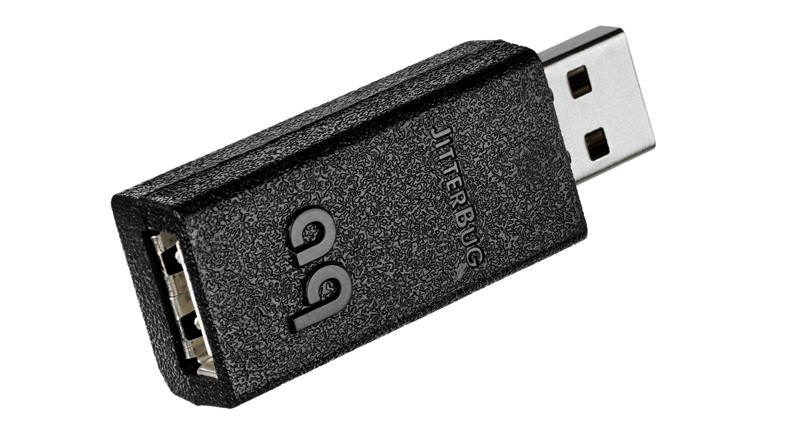 “This little device looks like a miniature plug-in DAC, but actually fits between a DAC or USB cable and a USB jack on a computer, DAC, or music server. Its mission is to reduce jitter and isolate the computer from the DAC. Judging from its sonic effects, the JiterBug does just that, offering a smoother treble, deeper soundstage, and more relaxed and natural presentation. A no-brainer recommendation for the asking price.”– The Absolute Sound 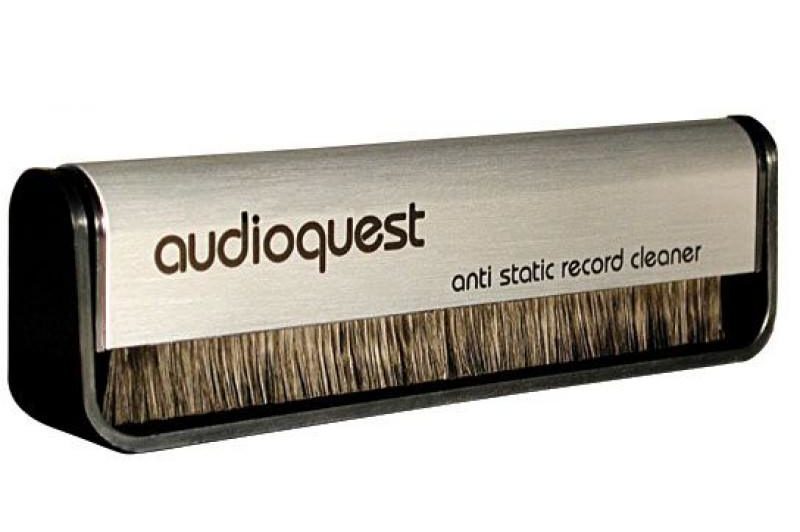 “What’s the best way to keep clean records clean without attracting dust particles? One of our favorite methods is to use AudioQuest’s anti-static record brush, whose bristles are made up of ‘over a million polished carbon fibers.’ A swing-down brush guard doubles as a bristle cleaner to prevent dirt build-up.” -The Absolute Sound